Lessons About Diversity Taught by The Sneetches 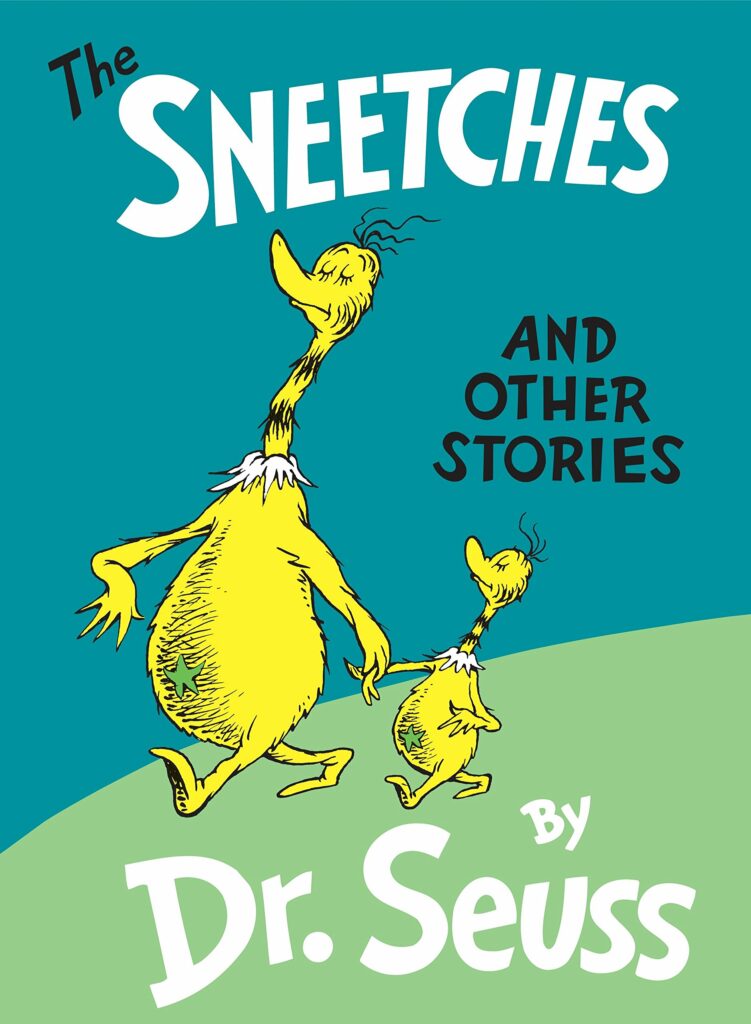 I read voraciously to my children when they were young. Dr. Seuss was my absolute favorite. The Sneetches envision prejudice and racism from the eyes of a child. Dr. Seuss makes prejudice look ridiculous. Here’s how this children’s story teaches lessons about diversity.

Does this sound familiar???? 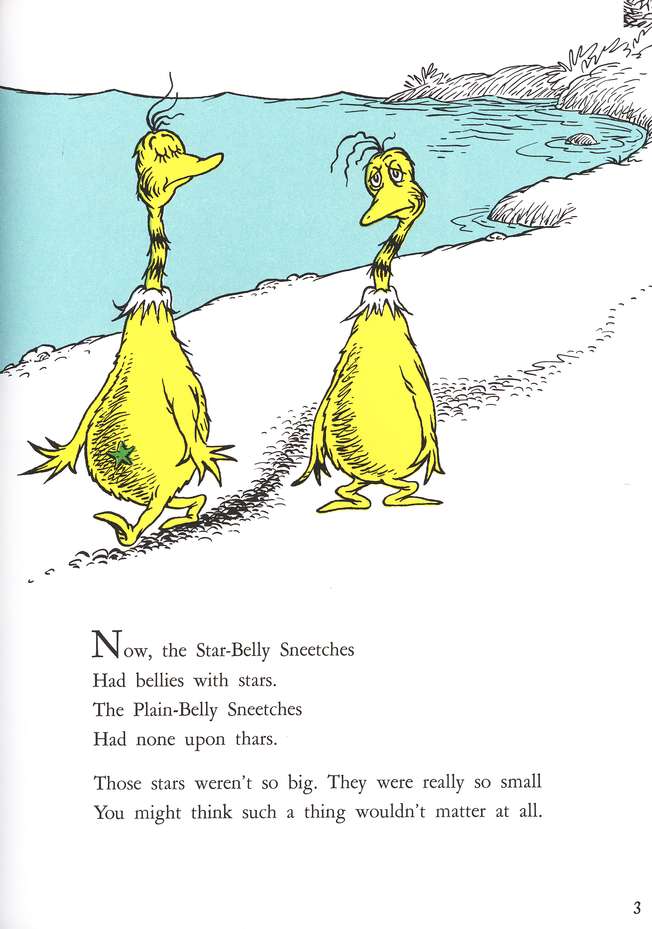 But, because they had stars, all the Star-Belly Sneetches
Would brag, “We’re the best kind of Sneetch on the beaches.”
With their snoots in the air, they would sniff and they’d snort
“We’ll have nothing to do with the Plain-Belly sort!”
And whenever they met some, when they were out walking,
They’d hike right on past them without even talking.

Good thing they don’t have a gun…now here’s a brilliant idea to create diversity!

Then ONE day, it seems…while the Plain-Belly Sneetches
Were moping and doping alone on the beaches,
Just sitting there wishing their bellies had stars…
A stranger zipped up in the strangest of cars!

“My friends,” he announced in a voice clear and keen,
“My name is Sylvester McMonkey Mc Bean.
And I’ve heard of your troubles. I’ve heard you’re unhappy,
But I can fix that. I’m the Fix-it-Up Chappie.
I’ve come here to help you. I have what you need.
And my prices are low. And I work at great speed.
And my work is one hundred per cent guaranteed!”

Then, quickly Sylvester McMonkey McBean
Put together a very peculiar machine.
And he said, “You want stars like a Star-Belly Sneetch…?
My friends, you can have them for three dollars each!”

The recent killing of unarmed men and women of color (culture) is front and center in our news cycle. Black Lives Matter protests rage reappeared during the pandemic. Could the hard earned lessons of diversity be taught by the Sneetches and the stars upon thars?

Ahmaud Arbery was running for exercise near Brunswick GA. Three men chased him down, shot and killed him. It took 74 days before anyone was arrested.

Breonna Taylor was shot in her own apartment and killed. The policemen had a warrant. Her boyfriend fired a warning shot and scared the police. Breonna was killed with 6 bullets.

These are just a few of the more newsworthy deaths. Racism rears its ugly head in many actions, shapes and forms. Every day. You can’t pass a law to stop it…we have to.

“The country just paused an entire vaccine rollout because of a complication with a risk of 1 in 1 million.
For Black men, the lifetime risk of being killed by police is 1 in 1,000.
For Latino men, it is 1 in 1,800.”

No Stars upon thars? A lesson in diversity.

Why are some people threatening? I always wondered why we can’t educate prejudice out of ourselves. Ingrained experience is subliminal. I want to think I am not a racist person. I know that racism is wrong and destructive. I hope that my actions prove this.

The Definition of Diversity – Diverse from What?

The definition of diversity in The Merriam-Webster Dictionary is:

especially: the inclusion of people of different races.

I like to listen to interviews with Krista Tippett on NPR on Sunday mornings. I am always getting ready to do something else. Doing laundry or getting ready to go to church or ride my bike. This morning she discussed the tough lessons about diversity. This particular interview made me stop and listen.

Resmaa Menakem MSW, LICSW,SEP wrote a book called My Grandmother’s Hands: Racialized Trauma and the Pathway to Mending Our Hearts and Bodies.

He teaches workshops on Cultural Somatics to African Americans, European Americans and police officers. He is a Minneapolis-based therapist and a senior fellow at The Meadows.

His grandmother’s hands were small and swollen. As a kid, he asked her why they were so fat. She told him the story of how she started picking cotton when she was four years old. How cotton plants have long barbs that cut your hands and make them bleed. How hard and long she had to work in the fields.

That is why her hands are fat.

Menakem studies the field of epigenetics. How trauma and resilience crosses generations. He argues that the white body has been made the standard. Black people live in a society that makes them feel their body is deviant. This creates trauma. This trauma is passed down through our DNA.

He proposed a question to a group claiming DEI (Diversity, Equity and Inclusion).
“How many people here believe in diversity?”
Everyone’s hand shot up with pride.
Next he asked, “Diverse from what?” Because “diversity” means you start from somewhere and diversify from it.

Those hands did not know what to do with themselves.

This is an important concept to fully understand. I am white. I will never know what it feels like to lecture my son about how to act around police. How not to get shot or harassed. Why my son or daughter should not be treated with respect like anyone else in the world. When they treat others with dignity and respect.

How do we teach lessons about diversity?

His premise is that White Body Supremacy is passed down through our DNA. We have inherited our ancestors trauma. Color is an element of culture.

Krista read from the book:

White body supremacy…
“The white body sees itself as fragile and vulnerable, and it looks to police bodies for safety and protection. It sees Black bodies as dangerous and needing to be controlled; yet, also, as potential sources of service and comfort. The Black body sees the white body as privileged, controlling, and dangerous; it is conflicted about the police body, which it sees as sometimes a source of protection, sometimes a source of danger, and sometimes both at once. The police body sees Black bodies as often dangerous and disruptive, as well as superhumanly powerful and impervious to pain”

The point is that all of us have historic culture embedded in our bodies. Our reactions are reflexes. Controlling these reflexes takes awareness, practice and discipline. These experiences teach us lessons about diversity.

Painting a Portrait of Diversity

One of the things that keeps me in South Florida is the diversity of color, language and culture. I love my St. Mary Magdalene Episcopal Church community. The light in the sanctuary at 10:30am is spectacular. I have been itching to paint oil portraits of my community forever.

It was Lent 2019. For Christians, Lent is a time for self reflection, simple living and “giving something up.” Lent represents the 40 days and nights Jesus spent in the desert before he was crucified, died, buried and raised from the dead.

This Lent, Mother Natalie Blasco suggested that we give something for this Lent. Not give something up. I decided to launch The FAÇeADE Project. A collection of fine art oil portraits – painted from life (as much as possible). Portraits of not only our faces but stories about where we come from. Portraits of Diversity.

Lent begins on Ash Wednesday. The year before, 2018, Ash Wednesday (and Valentine’s Day) was unforgettable. Marjorie Stoneman Douglas High School with in lock down. A mentally ill young man with an automatic AR-15 broke into the school. He killed 17 students. And traumatized many more – a huge part of our youth congregation.

He killed our Carmen Schentrup. An amazing young woman. She was head of the Youth Group. A brilliant student with a future of service ahead. I watched her grow up in the pew behind me with her amazing family.

We ached from the loss. Our community held small group discussions about how to heal from this horrible tragedy. We supported the Schentrup family as well as each other. I must admit I learned so much from talking and listening to this diverse group of people. People I had spent a lot of time with but really didn’t know.

Here are just a few of the notable people I painted. They are now closer friends than before. I am white. I grew up in a different environment. But we do have a lot in common. Just talking and spending time – our precious time – opens so many doors and windows. Shining the light on what we have in common. Our lessons about diversity come with discussion. Taking the time. 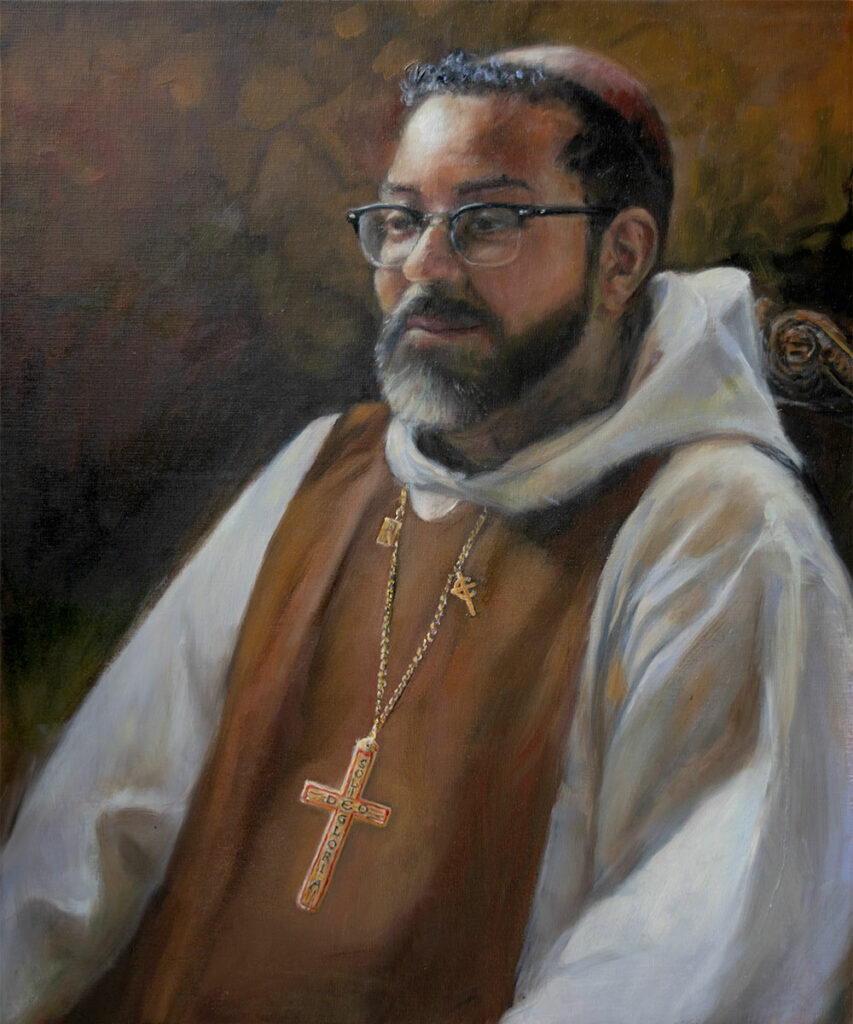 “We have the magical three, Spanish, Native and African. The food in my family is amazing because of the culture mixes! My family is influenced a lot by African and Spanish music so there is a lot of drums and flavor involved.”

Angel is a Brother of St. Gregory. They have three classic vows…Poverty, Chastity and Obedience. Angel was a peer support specialist at Henderson Behavioral. He helps people deal with trauma. Trauma caused by sexual abuse and violence with a specialty in opiate addictions.

Angel has now moved to New Mexico for an exciting new chapter.
This interview is from 2019.

Stars upon thars? Angel has denounced racial and sexual discrimination. He creates retreats designed to make people talk to each other about race. I have seen him mediate a wide range of stories. Directing people to communicate with each other to build understanding. 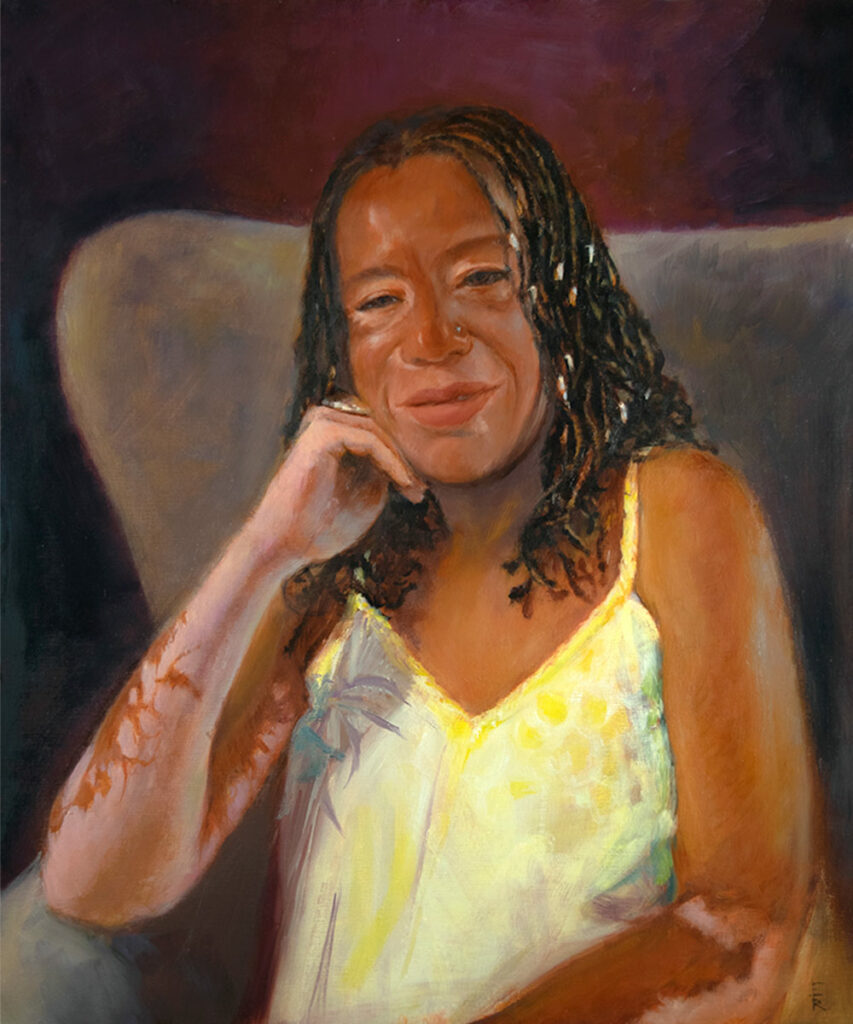 Michelle Bland
Beautiful Michelle (Shell) Bland was my first “victim.” She is an incredible faith warrior. Shell has nursed her sister and nephew through terminal illness. I had known her in passing before the portrait session but am so blessed from her gift of time. Now, she is a precious friend.

Michelle shares her thoughts about her vitiligo. Her Bermudian American skin is golden brown. Vitiligo is an auto-immune disease that creates spots of white on her beautiful skin. She says her struggle is that she is obviously two colors and you really want to be only one.

Here is a bit of our conversation. Click the link on her name to read the whole interview.

“Sometimes people are so curious. They don’t think about the individual. I can deal with kids. It’s the adults who will look at you and say “were you in a fire? What happened to your skin?” It’s like, Hi, My name is Michelle, what’s yours?” (the façade)”

Stars upon thars? I don’t see the vitiligo when I look at Michelle. She radiates goodness. That is the first thing I see.

Why is this important?

Systemic racism results in discrimination. Discrimination in criminal justice, employment, housing, healthcare, political power and education. We can pass legislation to attempt to fix it. We cannot pass a law to get rid of it. Lessons about diversity are uncomfortable. We have to voraciously work at recognizing and removing this from our culture.

By recognizing the awareness of our inherent prejudice we can work to stop it!  We have involuntary reactions ingrained in our DNA. No one wants to be a racist. Racists are ugly bad people who cause pain. The truth is sometimes we don’t know when we are one.

The Sneetches finally figured it out. What was the big deal about that stupid star? What is the big deal about how much melanin you have in your skin? Dr. Seuss shows children how ridiculous “adults” can be. Children aren’t born with prejudice…they learn it from the “adults.” 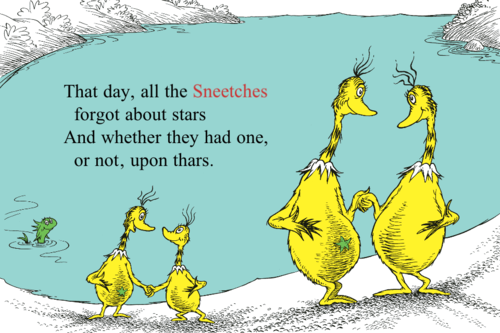 Want to put YOUR face in the FAÇeADE Project?